With all the latest updates, developments, and performance improvements in VR technology, there are a lot of new possibilities for our somewhat older 3D environments in Corpus VR that we developed for virtual therapy. This particular environment, the Tropical Island, was designed as a relaxation exercise.

It was cleverly set up so it would run older phones, for mobile VR. But now that we’ve moved along a couple of years it is time to take advantage of the increased processing power of smartphones and dedicated VR headsets. So this was an amazing moment to revisit our relaxing tropical island environment and give it a fresh new look. We gave the island some new water, fish, trees, and much more! In this article, we will tell you about all the changes and improvements we have made.

Water is one of the most important things on a tropical island! So we gave a lot of thought on how we want the new water to look, keeping some restrictions of the hardware in mind. The old way the water was created was with an opaque shader that had a static reflection baked in. To mimic reflections, we used a simple particle emitter. But of course, now we can do better. With more realistic-looking water.

The goal was to have colors that are vibrant but also fit well with the island aesthetic. To achieve this result, we decided to create a shader using Unity’s Shader Graph. This tool gives us a lot of flexibility on what colors we can use, how the foam along the edges would look, and how the water flows. After various test with different settings, we settled for the subtle but important upgrade. The water is now transparent, has waves, and foam, and is completely dynamic. 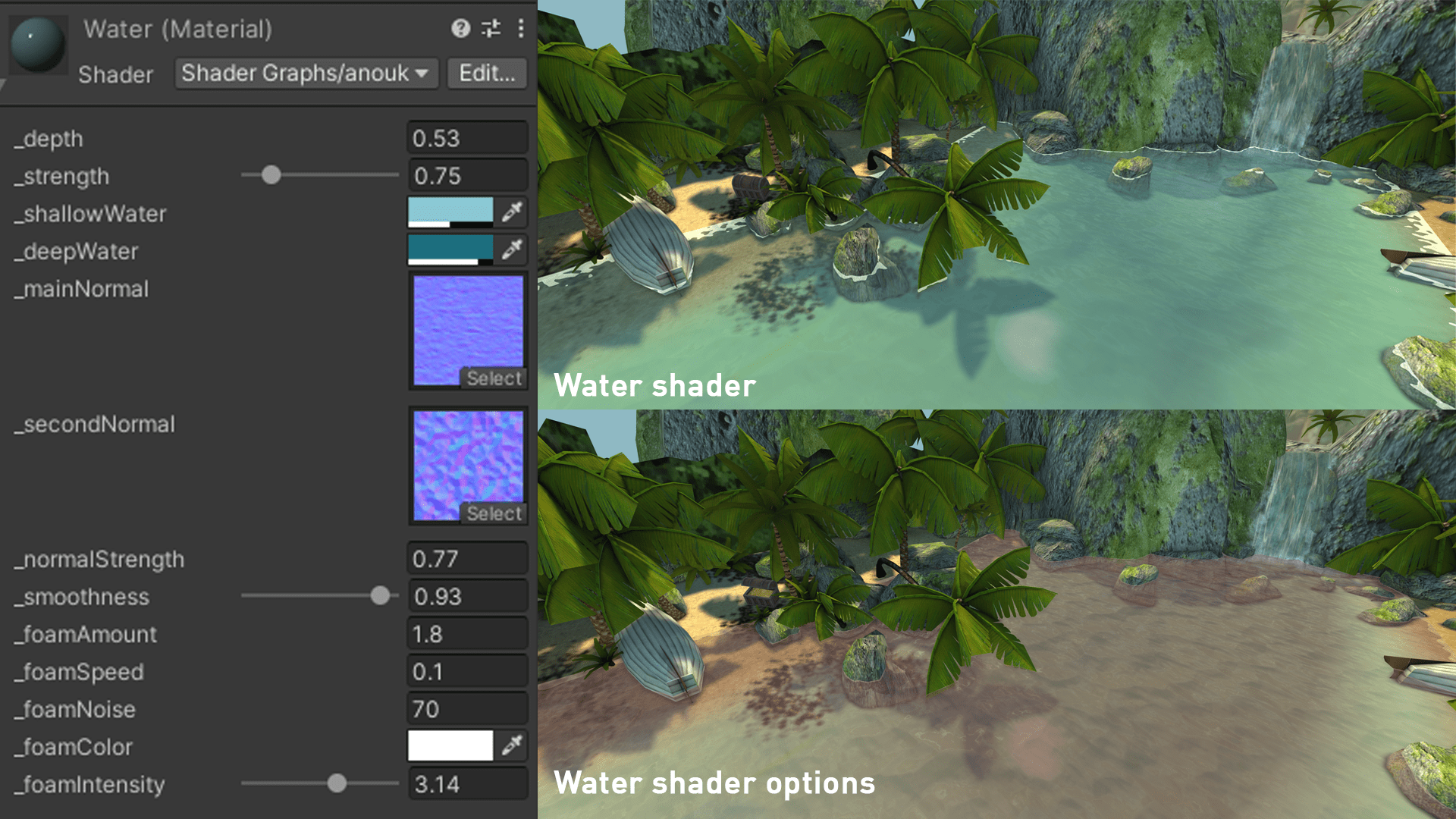 When making the water you also start to think about all the other things that come with it, for example, little splashes, or even waterfalls! The waterfall is a 3D model using a custom shader. This shader uses a water texture that scrolls over the 3D model and it has multiple variables to control the look and speed of the water.

While the water is a very important factor in the scene it takes more to make the scene feel lively and dynamic. So we worked on adding all kinds of little details the player can discover.

Because this type of detail increases the immersion. We already had our butterflies, but we added some more, in the water we now have fish swimming around and there are even some crabs walking along the shoreline!

The fish move in random ways around the water volume that is defined. And they have a simplistic but effective swimming motion. The crabs walking patterns are predefined. But this works really well in combination with the other elements in the scene.

Why updating the cabin in the tropical scene was so important

One of the amazing things about VR is that you are completely immersed in the environment you are in. This means you can look all around, not only left and right. But also above and behind. So while making the environment you really need to think about every angle of the island and what different stories you can tell there.

Also related to virtual therapy we are adding these elements so there are more therapeutic options for the therapist to work with. For example, the therapist might ask a patient to find a certain object in the scene which is a cognitive task. This has been shown to be very effective in direct pain management.

One of those little scenes inside our tropical island is the cabin located behind the player. The old cabin was pretty empty. This was mainly because we were pushing the limits of the number of vertices in our scene for the older systems.

So we really wanted to update the old cabin for a long time, and now we could do that. And we started adding new items and decorations to give it more personality.

We added tons of small little objects onto the cabin: flags, drinks, cups, seashells, postcards, and other decorations! To keep performance and memory usage in mind we didn’t want to add any new textures for the new assets, but use the existing base color cabin texture, so it was a fun challenge to create all these new items using the resources we already had. 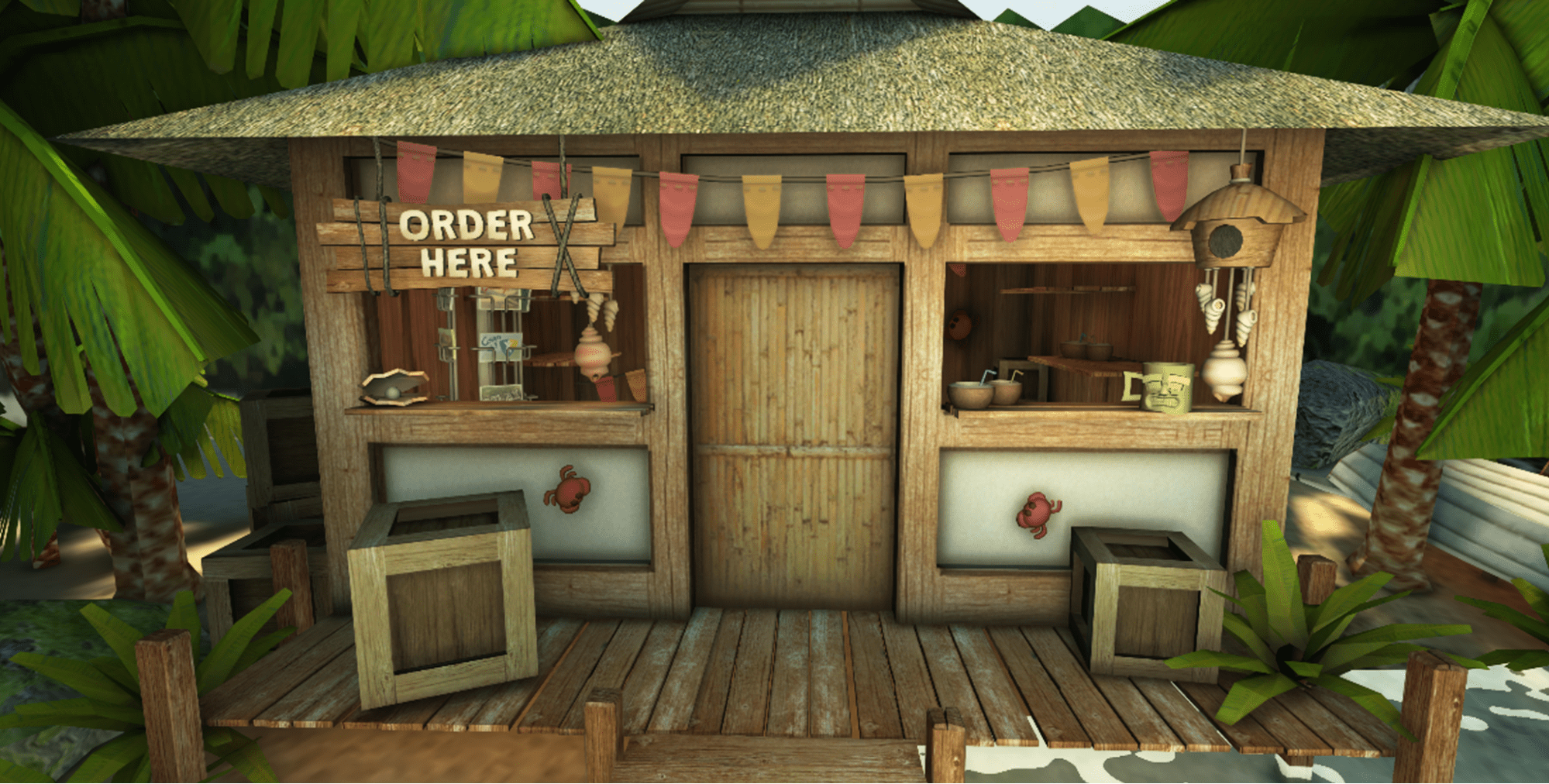 It is always so much fun to revisit an environment and rethink its story and atmosphere. With our tropical island, it was important to dive into the 3D assets again, knowing that it should be a relaxing and fun environment with lots of small things to discover while still performing well in mobile VR.

We hope to see you on the island!

Do you want to receive the latest updates? Subscribe to our newsletter.

Stay up to date